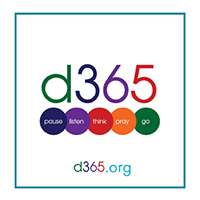 We have records in all the synoptic Gospels of Jesus hanging out with his disciples after his resurrection and before his ascension.  Matthew 28 tells of the disciples meeting Jesus in Galilee where they were given the Great Commission.  Later manuscripts of Mark’s Gospel tell of Jesus walking with two followers on the road to Emmaus and later appearing to the eleven as they were eating.  Luke 24 also tells of Jesus walking with Cleopas and a friend on the road to Emmaus, but they did not recognize him until he broke bread with them.  They then found the eleven in Jerusalem and were reporting about their encounter with Jesus when he appeared to all of them.  He allowed them to touch him and they gave him a piece of fish to eat.  Jesus told them to stay in Jerusalem until they had “been clothed with power from on high.”  He then led them out to the Mount of Olives where he was “taken up into heaven.”

Bible Verse of the Day